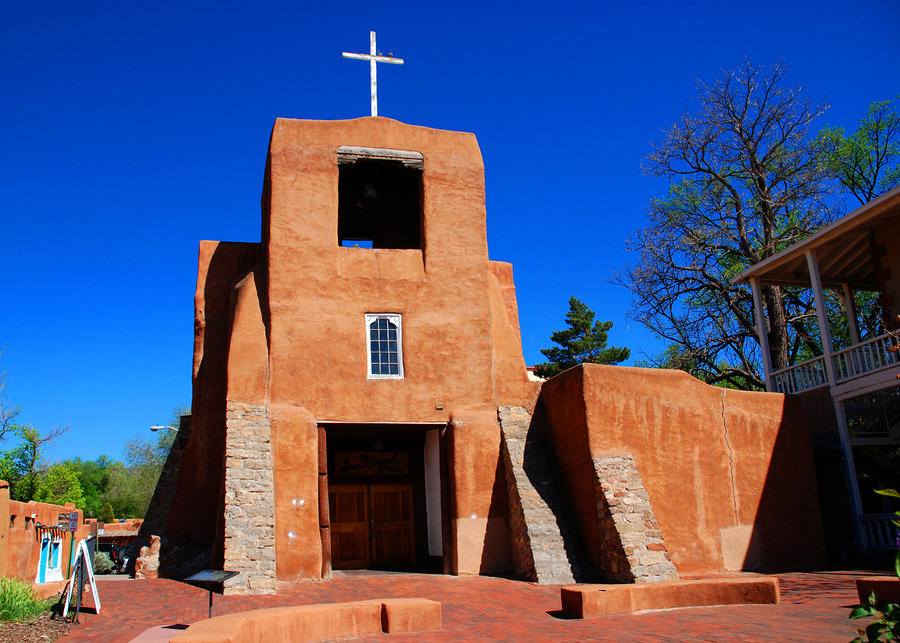 Last Sunday I visited the oldest church in North America, San Miguel Mission in Santa Fe, which was originally built in 1610 by the Tlaxcalan Indians from Mexico under the supervision of Fray Alonso de Benavidez, OFM. The church predates the Puritan settlement at Jamestown and the  Spanish settlement at St. Augustine, Florida. Indeed it has been center stage in the early history of  Santa Fe and the New Mexico territory. It is said that the Pueblo Indian rebellion of 1680 began with the burning of San Miguel Church.  Eighty Tlaxcalan Indians, Spanish settlers and missionaries died within the Church when the roof was set afire by Pueblos, leading to its collapse. After defeating the Pueblo tribes and resettling Santa Fe in 1691, the Spanish Conquistador General Diego de Vargas had a new roof constructed and the thick adobe walls redone by 1710.  Subsequently a three tiered bell tower was constructed in 1830. In 1858 Bishop Lamy purchased the Mission San Miguel from local residents and converted the meeting rooms into the first school of the New Mexico territory, taught by Christian brothers. In 1862 the Christian brothers covered the dirt floor with wooden planks, built an altar rail in front of the sanctuary and enlarged the entrance door to the chapel. In 1872 a 4.5 earthquake took down the three tiered church tower and the San Jose bell. The church was closed as the Christian brothers lacked funds for repairs and even considered demolishing the 250 year old structure but Santa Fe residents came to the rescue, raising the necessary revenues to restore their beloved historical Mission.  In 1875 stone buttresses were built on the front of the chapel to shore it up, both the exterior and the interior were plastered, a tar and gavel roof replaced the old mud one, and finally a new and smaller bell tower was built. The remodeled bell tower still stands but the bell is no longer in the tower. Owing to its weight it was brought down to help preserve the tower. The San Jose bronze bell which was cast in Spain in 1350, now rests in the vestibule of the Mission.

The interior of the chapel is long and narrow consistent with Spanish Southwestern colonial mission architecture. The ceiling is supported by 20 hand carved wood vigas. A large wooden beam holds up the front of the choir loft in the back of the church. On it, carefully inscribed in Spanish, was written, " The Marquis of Penueala. The building was erected  by the Royal Ensign Don Augustus Flores Vergara, his servant, in 1710." Several religious paintings grace the walls. In the left rear of the chapel is an early reproduction of Our Lady of Guadalupe. Facing the altar, the painting on the left on buffalo hide is of Christ on the Cross, the painting on the right on deer skin is of Saint John the Baptist. These were painted by he Franciscan friars around 1630 and were used as teaching aids in their work of converting the Indians. Directly to the left of the altar is a painting of the Annunciation, believed to be the work of a disciple of the Spanish painter Murillo. To the right of the altar is an encased Penitente carving of the crucifixion from the early 1700's.  The oldest reredos in New Mexico hangs as the backdrop to the altar. This wooden structure which was hand carved and painted in 1798 contains a statue of San Miguel, the patron of the Mission Church. This statue was carved in old Mexico in the 1600's and was brought by the Franciscan missionaries to Santa Fe.  Above the statue of San Miguel is a painting of Christ the Nazarene. The 4 oval paintings on the reredos date back over three hundred years. The oval painting at the top to your left is St. Theresa of Avila. Below it is Saint Francis of Assisi. To the right is Saint Gertrude of Germany, and below is Saint Louis IX, king of France.

In 1955 the Christian brothers commissioned an archaeological study of the ancient chapel. The investigation revealed the original sanctuary dirt floor and altar steps as well as the adobe walls burned during the Pueblo rebellion. The dig also uncovered 300 human remains, most believed to be the devout Tlaxcalan Indians, buried beneath the sanctuary floor. The Franciscans, in those ancient days, often made arrangements for the dead to be interred, if possible, under the altar of their Catholic Church in the hope of being remembered in the prayers of the faithful who attended Mass there. On the Sunday I participated in Mass at San Miguel Mission, the history of this Mission church reminded me of the early Christians who settled in New Mexico, their diversity reflected in our contemporary Southwestern Christian population, their perseverance and sacrifice a testimonial to the staying power of their faith, passed on to us. I encourage all Christian pilgrims to visit San Miguel Mission and to remember in their prayers those who first brought the Christian faith to New Mexico.